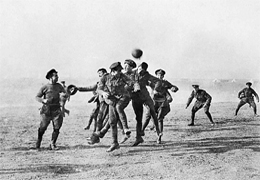 
This report appeared in the then Leicester Daily Mercury on Tuesday, 26/11/1918.


The funeral of Miss Kathleen Adele Brennan of New South Wales, who came over to this country as a V.A.D. (Voluntary Aid Detachment Nurse) and died on Sunday [24.11.1918], at North Evington War Hospital where she had been engaged for two years, took place at Welford Road Cemetery this morning with military honours. The coffin, which was covered with a Union Jack, was borne to the cemetery on a gun carriage, followed by a large procession of the R.A.M.C. (Royal Army Medical Corps) staff and V.A.D. nurses from North Evington and the base hospitals. The body was interred in the soldiers corner of the cemetery and the service was conducted by the Reverend. Fr Lindeboom Lieutenant Brennan of the Australian Forces [brother] and three of the deceased's Australian V.A.D. friends at the hospital were the principal mourners,

A party from Glen Parva Barracks fired three volley's and the 'Last Post' was sounded by R.A.M.C. buglers. Floral tributes were sent by the four Australian V.A.D. nurses at the hospital, R.A.M.C. officers, the R.A.M.C. staff, the V.A.D. staff and the maids at North Evington Hospital and Miss Michael.

The name of Kathleen Adele Brennan is inscribed on the Memorial Wall in the WW1 Military Cemetery. She was buried just north of the Memorial Cross bearing the Sword of Sacrifice. Her Grandparents were all free settlers from Ireland, the Keatings having migrated in 1839 and the Brennans the following year.

It is a family tradition that Kathleen Adele and her siblings agreed that while all wanted to volunteer to serve in the Great War, one girl and one boy would have to stay in Australia as their parents were elderly.

Kathleen and her brother William Keating Brennan, a Lieutenant in the 12th Australian Light Horse who died of wounds on 20th April 1917 and is buried in Palestine 8 Gaza War Cemetery, both paid the ultimate sacrifice .

Lieutenant John Clive Brennan of 4th Battalion 1st AIF was wounded in action on 14th September 1918 and invalided to England. He recovered and returned to the front shortly before Armistice Day but had indifferent health and died at the age of 50.

In summary, Kathleen Adele was a V.A.D., a member of a voluntary aid detachment, with the Australian Red Cross. She was part of a special detachment of probationers recruited to serve in British Military Hospitals during World War 1.

She left Australia in September 1916 on the SS Osterley and on arrival in England was posted to the 5th Northern General Hospital in Leicester where she served until her death from Septic Pericarditis following Influenza.

Her grave is number 3 in the Military Section of the Leicester Welford Road Cemetery.