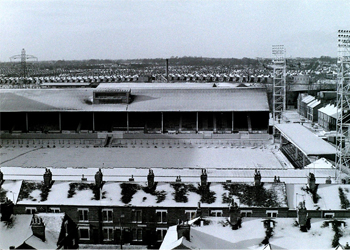 I think the Man U game will always live with me, first ever game? comebacks? debuts? what is your most memorable?.

That was some day Eric, and something that will never happen again I feel with the goalkeepers.

Marking the pitch out and fitting the decker roof

Cambridge, Winning a game to send us to Wembley for the first time since I was 9, nothing comes near it

Either the Oxford 'great escape' or Newcastle on the last day when Walshy equalized, then slotted that OG in straight after. Remember watching the pitch invasions from the safety of the Filbo St end.

Oxford game for me! Close 2nd is the Chelsea game in 89 for other reasons than the game itself.

Up there with me beating Man Utd 6-0 in 1961 at home of course.
but tops the bill was the F.A. Cup Tie replay in 1968 against Man City when we came back to win 4-3 Frank Large scored twice and I think it was Nish and Fern for the others nearly 40.000 there.
Very very close was the draw with arsenal 3-3

League Cup Semi,2nd Leg versus Villa. Right at the end,Robbie Savage taking the ball to the corner flag, and we all knew it was Wembley again!

One other funny one was when my uncle knobbled Wallington

You're related to Chic Bates?

1982/83 Burnley, 0-0. Getting into the City dressing room after the game to help the team celebrate promotion. And then giving the news to half the team that Derby v Fulham had been abandoned. Larry May gave me a bottle of champagne to help get me into the spirit. The official history DVD shows me in the dressing room, wearing denim ,and lots of hair.

Beating Spurs 1-0, 3rd round FA Cup 1974. Steve Earle from a Stringy knock-down, last minute. I get piloerection just thinking about it.

Wellers first time volley into the net,straight from the corner kick! Magic!

Rod the Nod's overhead kick, great start to the season.

Port Vale circa 91. They scored after 2 mins and that was it. Think we had Paul Kerr on loan.
On a serious not Leeds at home 4-2 Super Rambo comeback was good but has to be Shrewsbury in the cup.

Sunderland ,league cup semi 2nd leg. Just the feeling of sheer relief at the final whistle.That one was so tense!

In terms of games, Shrewsbury, Cambridge and the 3-3 arsenal match.
In terms of atmosphere, the expectant crowd in the build up and start to the game against Athletico Madrid.

Some great memories there, but I'm with Kendall on the '68 Man City replay. 40,000 and wedged in like sardines on the kop, once we got back to 2-1 before half time, the crowd willed them to victory.
All the better after losing 1-0 in a replay two years before after being 2 up at Maine Road - a certain Mr Young getting all three of their goals!

Your right there Peatling, best ever at Filbo was Man City '68..

Oxford and Cambridge games .Also getting nicked last ever game at filbo for alleged burger throwing.I fought the law and i won

Leicester 3 v 3 arsenal, never been through so many emotions so quickly in my life []

The Man City replay was the game of games,never heard the crowd so loud before or since ,if ever a team responded to the crowd it was that night,girl went down to the ground next morning to see if anyone had handed her skirt in ,i dont want to give it the old things were better in my day but im afraid they were

Blimey, how did she lose her skirt [?]

went to all of those late sixties cup games, trouble is I was only 8 and it's all very fuzy, I can remember Man City taking the lead, I think the Chinaman scored, I can also remember Lochhead hitting the bar with an header just on HT against Southampton and the bar was still shaking when the ref blew. Those were the days!!

That game when we beat millwall 3-0 midweek, 93. Aggers sent off. Tense atmosphere. Even a brass band on the pitch at half time got abuse. Was 14 at the time and in pen 3. Remember getting up for school the next day and my ears were still ringing.

The arsenal replays.
I think it was Radford that broke my heart.

arsenal replays, 1975 ?? I remember the first match at Highbury. Apparently we were going to take the North Bank that day [rle] Nasty atmosphere in the Clock End, fighting all through the game.
Didn't we get awarded the second replay at home on the toss of a coin ??

We couldn't take the Clock end that day !!

Radford and Kelly in 1973 and Radford in 1975, He scored a snorter for Hereford tough

The Kop was that full for the 2nd replay, I couldn't squeeze past the back row, never saw a kick.

Oxford for me ....it meant so much...yet little did we know!!!
other than that arsenal,Cambridge,Liverpool.....dont make me choose !!!

I'd be with mac on this one, them arsenal replays were definitely summat else...night games just seemed to add to the occasion!

Vs Athletico Madrid. I genuinely wanted to murder that ref.

The City cup game 4-3
Liverpool 2 down and a fantastic Weller hat trick earnt the win.
A 2-2 draw against Man Utd when Coppell and Hill played 45mins of wonderful attacking football.
Alderson and Bob Lee in the last 5mins against arsenal.

Wellers 2nd half hat trick against Liverpool and Stevie Earles late winner against Spurs in the FA Cup, i just managed to sneak in the ground after attendance centre on Upperton Road.....[:O]

A funny memory was the last ever game at Filbert St against Spurs, at the end of the game the guy on the tannoy announced that the players would only come out for a lap of honour if the fans stayed off the pitch, me & my 2 eldest lads were in the Double Decker watching when a fan ran on from the East Stand, it was my brother Mark, the first one on the pitch []
The players still came out anyway.....[^]

I was the last person to run on at Filbert Street.
I ran on after Auld Lang Syne after the lights went out.

Has to be the 4-3 cup game against Man City in 68. Had been to the two previous Man City games in 66 and 67 where we'd lost both games but this match was special. Man City had a brilliant team in 68 and to come back from two down was brilliant.

Another one was being 0-2 down to Swindon and scoring two in last minute to draw. One was a 30 yard screamer from Mark Venus!

Some great memories in this thread,some I was too young to remember like Man City as first game was 1969/70.
On the football side there have been many great memories,wonder if there will be a Walkers/King Power thread in many years time ?.

The first Man City cup replay drew a massive crowd at Filbo ,Leicester had nearly 20,000 at Maine Rd in a crowd of 52,000 ,Leicester went into a 2-0 lead but allowed the Mancs back in to draw 2-2 ,thousands of thier lot turned up for the replay and the traffic into Leicester was amazing ,i had to get off the bus( which was going nowhere ) against County Hall and walk to the ground ,and by the time we got there the turnstiles were shut with thousands of people milling about,we went through an entry in the terrace housing ,climbed up the wall and on to the Popular side floodlight, through the barbed wire and on to the Popular side roof,it was packed up there ,both sets of fans ,our cunning plan was to jump down when Leicester scored but due to a rare mistake from Mr Banks thankfully we never had the chance, it was very cold and uncomfortable up there but i would gladly sit up there for every game than have to sit in the new ground

A wee bit too early for me that fowlpen but Dad went to the 1st Re-play, I was old enough to go to to the second re-play, the thing that always gets me about that cup run was that the 5th round re-play against Rotherham drew a bigger crowd than the Man City game

Favourite Match
Beating the shaggers 3-2 at home in 1992, Phil Gee was on fire that night

Personal
Snapping my knee ligaments when I jumped off some steps in the Carling Stand in 1997.

Loads of great memories here, but I'm with Kendal and others, the Man City cup tie in 1968 was very special. I was in the Kop that night, and fortunately got passed down to the front and watched the game from the track. I was only 9, but I vividly remember going absolutely mental after we scored the fourth!

You've reminded me about that first replay in 66 against the Mancs. I was only 7 at the time and went with my mum and grandad as usual. I clearly remember the crowds queuing to get into the Kop/double decker. You were right, it was a freezing night and the other thing I remember was Banksy down our end running across the penalty box trying to keep warm, whilst we were attacking them up the other end. The other bit I remember was the crowd, just short of 42000, but not all ticket, so I suspect the crowd was much bigger. The Mans were in Div 2 then and did us 1-0 didn't they. Did Young score?

More in Most Memorable Filbo Experience