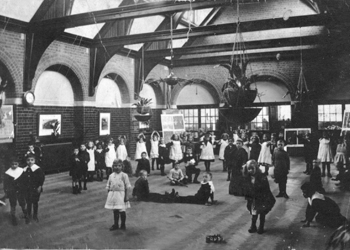 I was born in Bond Street Nursing Home a few yards from the Clock Tower in 1937 so I'm told. My first abiding memory was at a young age being taken to see my gravely ill mother at the LRI..... I didn’t know it was Mum as I was brought up along with my sister by Grandma and Granddad the older two stayed with my Dad. The early years must have been a hell of a struggle for my grandparents taking responsibility for two babies at their time of life, as they’re flock had long since flown the coop.

I started school at the age of 5 at Narborough Road pre-school with mornings taken up learning how to read phonically with endless repetition of reading easy words and vowels, writing short words correctly spelt, but most of the afternoons we slept on camp beds in the assembly room or in the summer outside in the playground weather permitting.

After two years there I went to Hazel Street Juniors to start formative education which was boring reading, writing and arithmetic being drummed into me incessantly..... The times table learnt by heart, through repetition, as was adding and subtraction. The written word was taught in the same way but now instead of writing in more or less capitals you know had to join up your letters to form your words. Reading was quickly graded by how well you read through a series of books through each quarter of the year, and you only advanced to your next class when you were sufficiently tested on all reading, writing, and arithmetic.

Playtime was always with a ball at you're feet, the ball was mostly a series of elastic bands to form the ball, everyone wanted to be Stanley Matthews or Tom Finney or Tommy Lawton, nobody wanted to be in goal.... Football in the Winter, Cricket in the Summer. At the end of each day - 4 o'clock - I used to make my way back home by way of the back of the Kop end of the Filbert Street car park, never any cars there except on match days and those were few and far between, always stopped to have a go on the swings or the slide at the top end of the car park, making my own way over Upperton Road Bridge, Sheffield street and on to Western Road and home.

Granddad’s house backed on to the L.N.E.R railway line and I used to spend hours on end watching the trains go by, but tea was always 5 o’clock sharp then out playing ‘til half past 6, allowed to stay up ‘til 7.30 but after listening to Dick Barton at 6.45 ‘til 7 o’clock it was ready for bed even though in the summer it was light until 12'o’clock because of double summertime, which allowed Farmers to do their work in the fields as the Blackout was in force.

Radio's were powered by lead accumulators which you took to the cobblers. They actually were acid baths as I recall because there was no electric circuit except for light, and one of my early jobs was taking this to the cobblers for renewal of acid, but it worked.... The greatest recollection was listening to a football match from PORTUGAL (that was an event itself) which we won 10-0 but mostly it was the comedy programmes like ITMA, Round the Horne, and Workers Playtime, Music Hall and Al Read and of course grandmas Sunday Palm Court Orchestra.

Saturday was helping Grandma ‘til noon then afternoons were either at the 2d rush OLYMPIA, REGAL, FOSSE, or WESTLEIGH Cinemas. Short cowboy's followed by Cartoons and then a Serial...... Flash Gordon, Charlie Chan, or a Roy Rogers western but as I got older I also went to Filbert Street for the game trying to get under the turnstiles or even under the main gates if I could, but mostly waiting until the last ten minutes when they opened the gates for all.

My Granddad started taking me down there in 1942 to reserve games, football then became a passion, out on to the street kicking a ball against a wall or even playing with the older lads...... as the street teams played other street teams, on cobbled stones I might add, and I always played in goal if I didn’t play, I was lookout for the local bobby.

If we didn’t play on the street it was either Brauny park or Welford Road reccy....... sometimes if we got away with it we would all go down the black pad cross over the L.M.S line and Down by the Cut to the Dunlop ground by there Factory (Bees Knees) full pitch even with goal nets, now they were a luxury.
Share:
Facebook Twitter Reddit Pinterest Tumblr WhatsApp Email Share Link