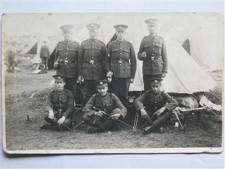 As I was in between intakes, I had to wait along with 3 others before a Platoon was formed so for half a week went around in civvies, this was proving to be nothing I had ever witnessed before, subjected to Army rules and regulations from the moment you stepped foot into Camp although without the knowledge of these rules.

Those first weeks were horrendous sleeping in a room with fifteen others, some crying themselves to sleep others up half the night, it took some getting used to. Blackdown was gruesome, big two story barracks of which there were four three........ smaller buildings for toilets and shower rooms one hellish sized parade ground at the end of which was another building for stores, downstairs, with an upper room as a classroom, situated at the west side of the parade ground was the Armoury.

The first day was all about you're introduction to Army life, meeting you're assigned platoon Officers and NCO'S after that and as soon as you had the required group to make a platoon, you were assigned you're barrack room and bed number. I remember the first day well after having a regulation haircut(short back and sides) we were marched to the stores for a kit collection everything from a tin helmet to a mess tin, from a holdall to a rifle, Beret 2 uniforms khaki, two mess uniforms webbing, boots gaiters, brass wear all in a kitbag. back to the billet and told to change into uniform and be out on parade in 15 mins well I looked like I’d been pulled through a hedge backwards bloody beret looked like a helicopter landing pad, trousers

3 inches to long.... battledress that you could have kept dogs inside never mind cats about one size to big......... I looked a prat but I wasn’t on my own.
We lined up for an inspection and two tailors came round to measure the jackets.............. the trousers you had to shorten yourselves, now this is where you learn what the term bullshit stands for, boots black with dimples all over, webbing that was browning had to be washed and dried before blancoing all brass wear to be brassoed to a high polish, you burnt off the dimples of your boots with the end of a spoon you then had to spit and polish those boots to a shine especially the toecaps that could see the reflection of your face in.

We were given 7 days to get the kit up to the required standard......then on the first parade they assessed you're progress and given marks for and against in amongst this was the first feeble attempts at square-bashing learning how to march heel first and how to keep step with everyone else, keeping a abreast, standing to attention, standing at ease, keeping a distance by using an arms length between you and the next in line monotonous regime during the day monotony at night trying to get your kit ready for your first billet inspection, where, you also had to lay your kit out on the bed in specific order along with your bedclothes(two blankets and two sheets wrapped in a formative fashion )then lay your kit out in a rigid formation on top of a sheet, clean tidy and your uniform pressed in army fashion distinctive pleats down the arms.

For twelve weeks this was your life ....REVELLIE at 6.30 breakfast between 7.00-7.30 out on parade in sports kit for a run till 8.30 then back to barracks to change into uniform and be on parade for 9.00...lunch 12.30 -1.30 then lessons in whatever like map reading, ground strategy, attack formations, and weaponry. NAFFI on camp at night if you wanted a drink or to socialise. This was basic training and lasted for 12 weeks but after 8 weeks you were allowed out of camp on weekends but within a timeframe 10.30 pm was the limit if you weren’t back by then and reported in to the guardhouse they came looking, late and you were on CO's orders in front of the officer commanding your regiment, CO's orders and you were in serious trouble as the battalion commander he could send you to the guardhouse for a specific term...the OC could only send you on Jankers which was confined to barracks and performing menial tasks like sweeping the camp or duties in the COOKHOUSE, or in cases recommend you for CO's orders for persistent abuse of rules.

As the days turned to weeks the platoon started to gel together after all kinds of stupidity with people misunderstanding orders turning left instead of right and vice-versa, rifle drill was hilarious at first but not so for the Corporal who was in charge....... trying Slow marching for the first time was laughable as everyone was out of step...... the same as double time marching no end caught the heel of the one in front and were sent crashing to the ground. Rifle training took place in the last two weeks of training taken out to the range for the first practice at shooting at standing targets the Lee Enfield had a tremendous kickback and if you didn’t keep the rifle butt firmly lodged in your inner shoulder you knew about it I was black and blue in that region until I managed to get the grip right and ended up a marksman after the initial series of tests... but we all got the gist in the end, then after the 12 weeks we went on to the Passing out parade without a hitch apart from a couple fainting as we were kept waiting an hour for the Commanding Officer to arrive to take the Salute.
Share:
Facebook Twitter Reddit Pinterest Tumblr WhatsApp Email Share Link